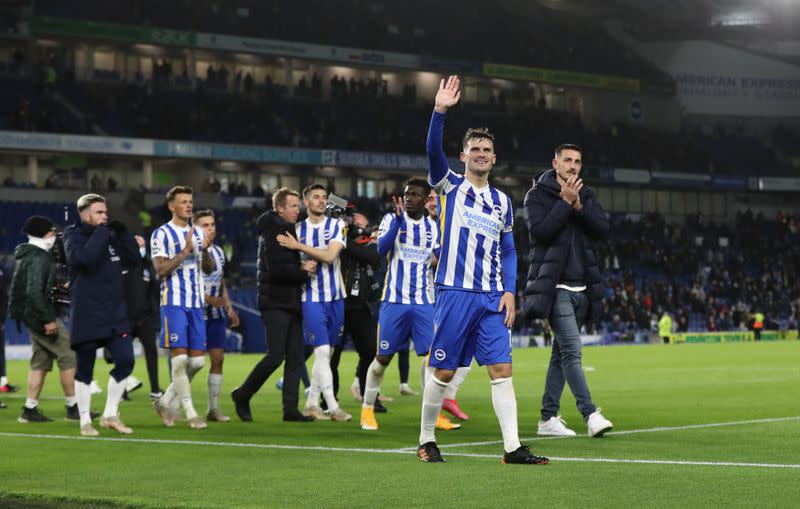 Brighton & Hove Albion scored three times in the second half from two goals down to beat Manchester City 3-2 at home on Tuesday in an English Premier League encounter.

The champions lost Joao Cancelo to an early red card.

Ilkay Gundogan struck in the second minute, heading home a superb cross from Riyad Mahrez to briefly silence just under 8,000 Brighton fans who had been allowed to return to the stands following over a year away due to the COVID-19 pandemic.

Cancelo saw red in the 10th minute for a clumsy challenge on Danny Welbeck.

But City struck again three minutes into the second half as Phil Foden won the ball inside his own half and out-sprinted the Brighton defense before slotting home his 15th goal of the season in all competitions.

Brighton’s amazing comeback began almost immediately, with substitute Leandro Trossard dribbling across the box and drilling the ball in at the far post as the Seagulls began to make the most of their numerical advantage.

Adam Webster drew them level in the 72nd minute with a towering header before Dan Burn notched the winner four minutes later scooping the ball into the net after his initial effort was blocked.

Brighton survived a late VAR check following Adam Lallana’s challenge in the box on Gabriel Jesus and a late City onslaught to secure a win that lifts Graham Potter’s side to the 15th spot in the table on 41 points.

Related Topics:BrightonMan City
Up Next

It’s not over, Tuchel warns Chelsea players after Leicester defeat