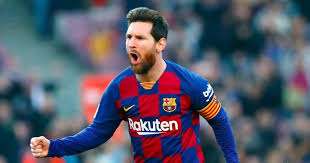 Lionel Messi’s astonishing career reached another epic milestone on Tuesday as he scored his 700th career goal during Barcelona’s 2-2 draw with Atletico Madrid.

The club’s legendary all-time leading scorer took his tally for the Catalan giants to 630 from 724 games with a cheeky Panenka-style penalty to put his side 2-1 up, and with 70 international goals also to his name from his 138 caps for Argentina, he now becomes the seventh player in history to reach 700 overall.

It wasn’t enough to earn his side the victory they needed to leapfrog Real Madrid to the top of the Laliga table, as a second penalty of the match from Saul Niguez earned the third-placed visitors a point at the Nou Camp.

Messi had earlier claimed his 321st career assist when Diego Costa turned in his curling corner kick at the near post only for Niguez’s first spot-kick – which was a retaken after Costa missed the initial effort – level the scores.

Cristiano Ronaldo, of course, became the sixth player to reach 700 goals back in October when scoring for Portugal but while the Juventus star achieved the landmark in his 974th game – and almost exactly 17 years after his first goal for Sporting Lisbon in 2002/03 – Messi managed it in his 862nd match and 15 years after his maiden goal, which came in his ninth senior appearance against Albacete in May of the 2004/05 season, aged 17.

Ronaldo, who was predominantly a playmaking winger for most of his six seasons at Manchester United, reached his first century against Tottenham in his 301st game aged 23 in January 2008 but his goal-scoring also skyrocketed to insane levels since then, with his previous 628 strikes in 704 matches coming at 0.89 per game overall while his last 529 at club level spanning 593 matches during this time have come at 0.93.

Those who rank Ronaldo above his great rival will not only point to his Champions League record tally of 129 but also how he’s managed to bag goals for clubs in three of the major European nations has and also spearheaded Portugal, for whom he’s netted 99 times, to a pair of international tournaments – Euro 2016 and last year’s Nations League. He also has 56 hat-tricks compared to Messi’s 54.

It was perhaps ironic that while Messi was seeking his 700th goal on Tuesday night, Ronaldo scored his 728th with a screamer during a 3-1 victory that put Juventus four points clear of Lazio.

Honours-wise, the Argentina star has lifted 26 major club trophies throughout his career, including 10 La Liga titles and four Champions League crowns, while he’s been awarded the Ballon d’Or more times than anyone else with six, including the most recent in 2019 when he beat Virgil van Dijk and five-time winner Ronaldo to the gong.

By contrast, the Portugal captain has 22 club titles, including a record five Champions Leagues, three Premier Leagues, a pair of La Ligas, and is on the verge of a second Serie A. You can see a full list of career stats and achievements further down.

One of the other players to have scored 700 career goals is obviously Pele, although his official competitive tally of 767 in 831 games is some way below his Guinness World Record mark of 1,281 in 1,363  matches which includes many friendlies for Santos.

The Brazilian legend is third on the list behind Czech striker Josef Bican, who scored 805 goals in 530 games in a career interrupted by World War II, and Brazil’s 1994 World Cup winner Romario with 772 goals in 994.

It could be possible for Ronaldo, now 35, to surpass Pele and Romario before he retires and he also has his sights set on the international goals record which is currently 109 by Iran’s Ali Daei.

Messi, who struck his 600th Barcelona club goal in his 683rd appearance for the Catalan giants during last season’s unforgettable Champions League semi-final against Liverpool, is now 33 and is also feasibly in with a shout of taking the overall top spot.

The heated debate as to who’s the greatest of all time probably won’t end until then. If it ever does.

Related Topics:Lionel. Lionel Messi
Up Next