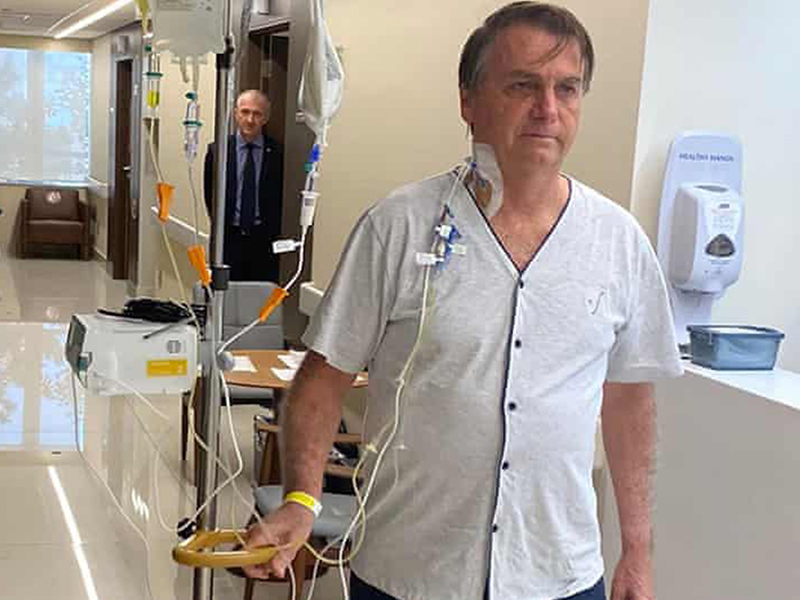 Intestinal obstruction is a blockage that keeps food or liquid from passing through your small intestine or large intestine (colon).

The far-right leader was originally taken to a military hospital in the capital Brasilia on Wednesday after suffering persistent hiccups that had lasted around 10 days.

Later that day he was transferred to the private Vila Nova Star hospital in Sao Paulo.

“I had to go on a diet, I did what I had to do. I wanted to leave from day one, but they wouldn’t let me. I hope that in about 10 days I will be able to eat a rib eye steak,” Bolsonaro told reporters as he left the hospital.

“It seems that my stomach was on fire. The cause was an intestinal obstruction, which is common in those like me that have undergone surgery, after the stabbing,” said Bolsonaro, who spoke to journalist for half an hour.

There had been fears Bolsonaro, 66, might need surgery to clear the obstruction, although that was quickly ruled out.

He has undergone surgery six times since he was stabbed in the abdomen in 2018 on his campaign train.

On Thursday, the hospital had said he was “evolving satisfactorily” while his legislator son, Eduardo Bolsonaro, said doctors had removed “close to one litre (a quarter of a gallon) of liquid” from the president’s stomach that was caused by the obstruction, considerably alleviating the pain.

While in hospital, Bolsonaro continued to work and was very active on social media, publishing photos and commenting on political subjects.

Owing to his abdominal problems, Bolsonaro has been told to “chew food well, eat lighter meals, exercise, walk,” head of the medical team at the hospital, Antonio Macedo said on Saturday.

Bolsonaro’s health scare came at a difficult time for the president who last week saw his disapproval rating climb to an all-time high.

The Senate has also launched an investigation over his handling of the pandemic, the seriousness of which he repeatedly downplayed and which has cost almost 540,000 lives in Brazil. The investigation was extended by 90 days on Wednesday.

Bolsonaro, who contracted Covid-19 last year, is also being investigated by the public prosecutor for allegedly failing to act on an embezzlement tip-off regarding coronavirus vaccine purchases.

The opposition is pushing for the president of the chamber of deputies to open impeachment proceedings against Bolsonaro.

Related Topics:BrazilJair Bolsonaro
Up Next