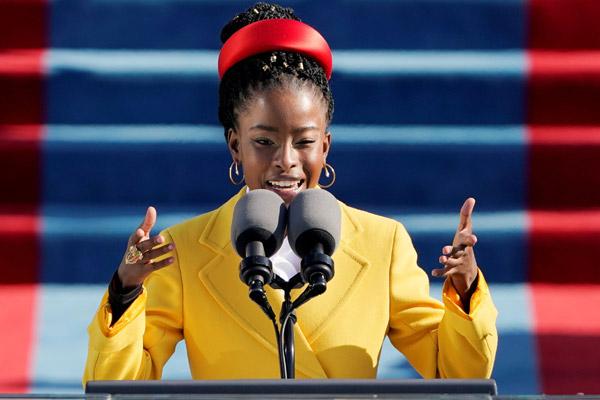 American poet, Amanda Gorman, has stolen millions of attention with her yet to be published books after reaching a career milestone by delivering an original poem, titled “The Hill We Climb,” during the inauguration of President Joe Biden on January 20.

The literary superstar who has a twin sister, Gabrielle, grew from winning the Youth Poet Laureate of Los Angeles in 2014, becoming the first National Youth Poet Laureate three years later, to the Capitol Hill as America welcomed her 46th president.

Vogue reports that Gorman booked her ticket to the inauguration when her poem “In This Place: An American Lyric,” delivered at the Library of Congress in 2017, caught the eye of Dr. Jill Biden, who contacted her last month about writing an original poem for her husband’s swearing-in ceremony.

“I’m not saying I’m better than anyone else, but I was called by the Bidens for a reason, and this moment has called me for a reason, so all I can do is show up and do my absolute best,” Gorman says. “That’s all I can ask of myself.”

“She is a very, very intelligent young lady. The first time I saw her, I knew that one day she was going to be very important… in our parish, the success of anyone is the success of all,” Gorman’s priest at St. Brigid Church in Los Angeles, Josephite Father Kenneth Keke who is from Nigeria told Catholic News Service Jan. 22.

The red satin Prada headband she wore during the inauguration ceremony led to the item selling out, while her yellow coat (also Prada) caused searches for “yellow coats” to increase 1,328% (according to fashion search engine Lyst) in the wake of her appearance.

However, the big gist is not the aforementioned but the modelling contract she signed with IMG Models, the same agency with Gigi and Bella Hadid, Kate Moss, Cara Delevingne and Ashley Graham.

The Guardian UK, quoting the industry publication The Business of Fashion, reports that Gorman will “be represented by the modelling agency for brand endorsements and other fashion-adjacent opportunities”.

Gorman, in an interview with Harper’s Bazaar, spoke about her love of style: “I’m a black woman with a powerful pen and a big heart, and I like my look to reflect that pride,” adding that she loves “loud, regal-looking dresses embroidered with flowers – a nod, I think, to my Afro-flower-child upbringing in Los Angeles. I’m also a fan of Victor Glemaud’s super stylish and comfy knitwear.”

From IMG to Super Bowl:

It was only last year (Feb 2) that Jenifer Lopez and Shakira shook the world with their Super Bowl 2020 half-time show performance as Kansas City Chiefs defeated San Francisco 49ers in a thrilling encounter witnessed by 99.9 million viewers in the U.S.

It has now been confirmed that Super Bowl 2021 is Gorman’s next stage and the 22-year-old will be the first poet to perform at the Super Bowl next month when she recites an original poem honouring three people — Los Angeles educator Trimaine Davis, Florida nurse manager Suzie Dorner and Pittsburgh-based James Martin, a Marine veteran who volunteers with the Wounded Warrior Project and who has taken in local kids facing issues at home — for their work during the coronavirus pandemic., the NFL announced.

Ain’t no stopping now, Gorman’s on the move!

If you think you’ve seen the highlight of Gorman’s rise to stardom, well you guessed wrong because the 22-year-old who published The One for Whom Food Is Not Enough in 2015 (poetry book) has attracted millions of interests for her upcoming books such that her publisher is reportedly printing three million copies of the books which will be released in 2021.

MORE READING!  'I’m the most honest and genuine person you’ll ever meet' – DJ Cuppy spills secrets about her person

This was disclosed by the New York Times’ publishing reporter, Alexandra Alter, on her verified Twitter handle on Thursday, January 28.

“Soaring interest in the inaugural poet Amanda Gorman drove preorders for her books so high that her publisher is printing three million copies of her upcoming books,” Alter tweeted to her 13.7K followers.

Here are the upcoming books by Groman and when to expect them:

Soaring interest in the inaugural poet Amanda Gorman drove preorders for her books so high that her publisher is printing three million copies of her upcoming books: pic.twitter.com/Plh5H8jHV3

Davido, Mayorkun team up for The Best video