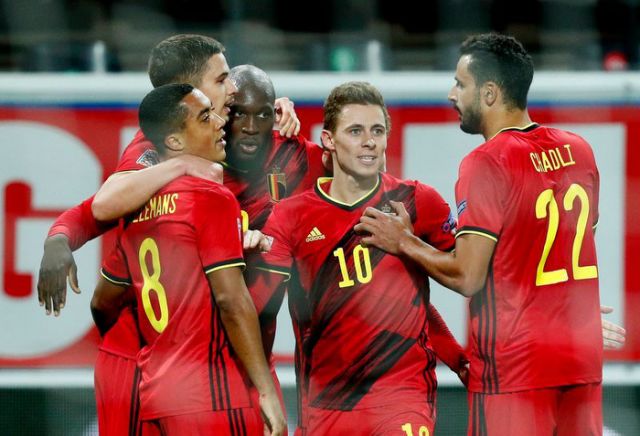 Romelu Lukaku scored twice to keep Roberto Martinez’s men at the top of the log with only a draw needed to qualify. The victory, however, gave them a five-point lead over Denmark and England in Group A2.

Leicester City midfielder, Youri Tielemans and Manchester City’s Kevin DeBruyne were the other scorers with Real Madrid keeper, Thibaut Courtois helping the Denmark side with an own goal.

Jonas Wind had earlier cancelled Tielemans’ 3rd-minute goal to keep the game at 1-1 in the 18th minute but Likaku’s brace (57′, 69′) put the home side in the driving seat.

DeBruyne 87th-minute goal ensured there was no dramatic end than Courtois’ 86th-minute howler that saw Nacer Chadli slip by him into the net for an own goal.

Belgium join France, Italy and Spain in next year’s finals.
Meanwhile, Andrea Belotti and Domenico Berardi were on the score sheet as Italy beat Bosnia & Herzegovina 2-0 to make the Nations League’s finals.

Italy dominated to ensure they finished top of Group A1 and earned the right to host the Nations League finals in October next year. [Sky Sports]

Related Topics:BelgiumItalyUEFA Nationa League
Up Next

I’m tired of being blamed for everything at FC Barcelona, Messi says