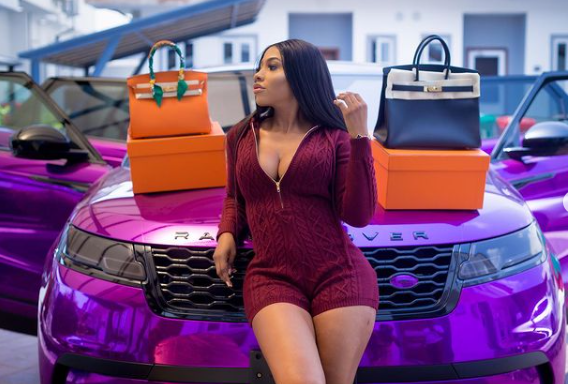 BBNaija Pepper Dem season winner, Mercy Eke, has shared a picture of her striking a pose with two Hermes bags she received from her man, Mr Montana as her Valentine gifts.

Mercy Eke shared the photo on her social media page, Instagram, as she appreciated her man for the gift.

”I love that feeling of being in love, the effect of having butterflies when you wake up in the morning.

Thank you baby for the gifts @official_mrmontana”she wrote

Happy valentine’s day🥰 Elegance is when the inside is as beautiful as the outside.

In other news, Tanzanian recording artist, Diamond Platnumzhas revealed he almost went bankrupt after featuring popular Nigerian singer, Davido on his song in 2014.

Platnumz who featured Davido on the remix of his hit track “Number One”, in an exclusive chat with Nairobi News recalled how the collabo almost left him bankrupt.

According to him, he spent ten times more than what he used to spend in his previous music projects in the collabo with the DMW boss.

Diamond disclosed that the money was too much for him that he had to approach several banks for loans to enable him to finance the video shoot for “Number One” remix.

The Tanzanian music star, however, noted that although he spent a lot on the project and nearly went broke, the collabo with Davido opened several doors for him.