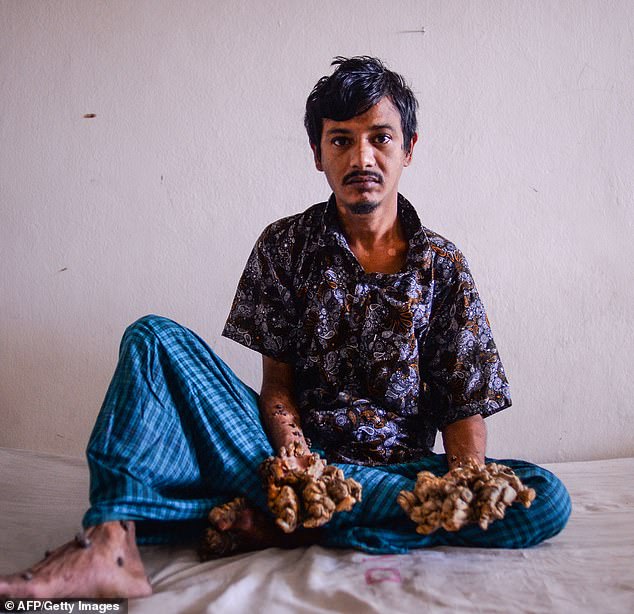 Bangladesh’s ‘tree man,’ 28-year-old Abul Bajandar, has begged doctors to relieve him of his unbearable pain and amputate his hands which are covered in bark-like growths.

Abul Bajandar has had 25 operations since 2016 to remove growths on his hands and feet caused by a rare condition.

The former rickshaw driver was overjoyed when doctors seemed to have treated his condition, after cutting off 11lbs (5kg) of growths.

But the father-of-one was readmitted to hospital in January because the condition worsened, with some growths several inches long.

He has made international headlines in his battle against Epidermodysplasia Verruciformis, thought to strike only 200 people worldwide.

Mr. Bajandar is quoted as saying: ‘I cannot bear the pain anymore. I can’t sleep at night. I asked the doctors to cut off my hands so I can at least get some relief.’

His mother Amina Bibi said: ‘At least he will be free of pain. It’s a hellish condition.’

Doctors had believed they had beaten Mr. Bajandar’s disease in 2017, at which point Mr. Bajandar said: ‘I hope the curse won’t return again.’

He had just become a father and couldn’t wait to hold his daughter.

He met his wife Halima Khatun before he contracted the disease, but it had taken hold by the time they married, against her parents’ wishes.

Mr. Bajandar said he initially thought that the warts were harmless but slowly as the growths covered his hands and feet, he was forced to quit work.

Mr. Bajandar fled a Dhaka clinic in May last year following a relapse, but it is not clear why. He was readmitted in January.

Dr. Sen said: ‘He gave his personal opinion. But we will do whatever is the best solution for him.’

Mr. Bajandar lived in the hospital’s private wing for nearly two years during his first round of treatment.

But Mr. Bajandar said he wanted to go abroad for better treatment. He does not have the money to cover the expenses.

More than 200 cases of EV have been reported in the literature so far, according to Genetic and Rare Diseases Information Centre, a branch of the US Department of Health and Human Services.

Doctors declared her surgery a success, but her father later said the growths had returned in even greater numbers and the family halted the treatment and returned to their village.

Man sets himself on fire after shooting colleague