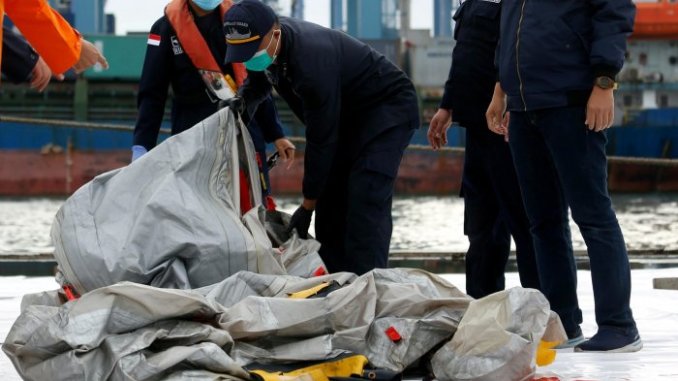 Rescuers on Sunday collected five bags of human body parts and three bags of debris of the Sriwijaya Air plane that crashed in the waters off the coast of the Indonesian capital Jakarta on Saturday, according to a senior official

“We received three bags containing the debris of the plane and five bags of human body parts,’’ Operation Director of the National Search and Rescue Agency Rasman M.S. said.

All the eight bags were carried by the navy’s KRI Kurau ship, according to the director.

This has brought the total body parts discovered by the rescuers to seven.

The Boeing 737-500 aircraft, flying from the capital Jakarta to Pontianak city in West Kalimantan province on Saturday afternoon, crashed into the Java Sea off Seribu District in the north of Jakarta.

It was carrying 50 passengers, including seven children, three babies and 12 crew members.

The body parts would be handed to the police’s DVI (disaster victims identification) unit for identification and the debris would be sent to the National Transport Safety Committee for analysis, according to the agency.

The search and rescue operation for the victims and the wreckage of the plane is still underway, it said.

UTME: JAMB to prosecute offenders of the admissions process