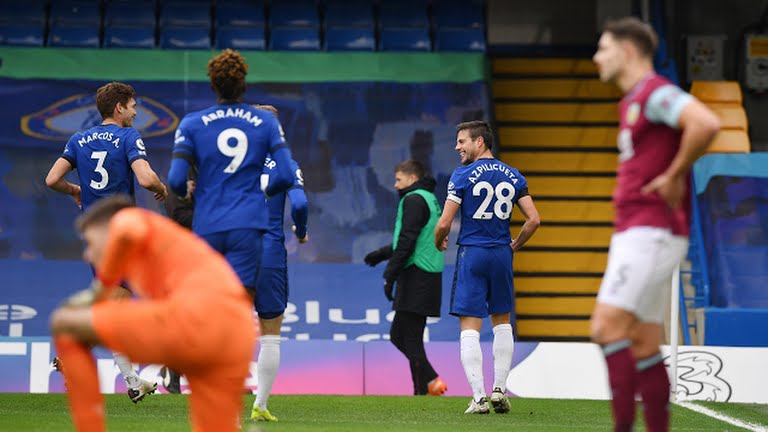 César Azpilicueta and Marcos Alonso were on target as Chelsea’s new manager, Thomas Tuchel, secured his first Premier League win as the Blues saw-off Burnley.
Tuchel’s first match in charge of the Blues after replacing sacked Frank Lampard ended in a goalless draw against Wolves at the Stamford Bridge on Wednesday.
Azpilicueta gave Chelsea a 40 minute lead against Burnley, scoring the first goal under Tuchel’s reign after the visitors were caught out with a quick counter.
Alonso made it 2-0 in the 84th minute as he marked his return with a superb goal after a few months out. Pulisic chips the ball into the box and Alonso was unmarked, he chests it down, controls it and then volleys it into the back of the net.
The Spaniard has not played for the club since reportedly having a fallout with Lampard in September 2020.
Tuchel has now become the first Chelsea manager to keep a clean sheet in each of his first two Premier League games in charge since Rafael Benitez in November 2012.
The win takes Tuchel’s side to 7th on the league table, levelled on 33-points with eighth-placed Everton and sixth-placed Tottenham.
MORE READING!  Manchester United, that's all we care about - Guardiola after Wolves demolition
Related Topics:BurnleyCesar AzpilicuetaChelseaMarcus AlonsoThomas Tuchel
Up Next

‘I live every day proud that I’m a black man’, Rashford fights back after racial attack