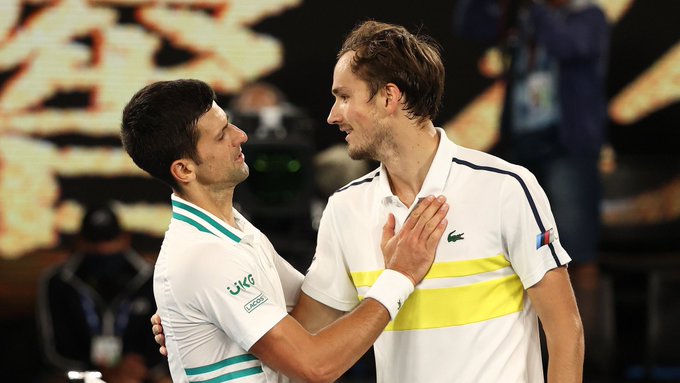 World No. 1, Novak Djokovic has paid a tribute to world no. 4 – Daniil Medvedev after beating him on Sunday to clinch his ninth Australian Open title.

Djokovic took a 3-0 lead in the first set but the Russian responded after winning a 28-shot rally to find a way to break back and level up at 3-3. The set ended 7-5 in favour of the world no. 1.

Medvedev broke immediately at the start of the second but the 33-year-old responded by winning five out of the next six games as Medvedev began to unravel, venting his growing frustration on his racket.

Another break in the next game gave Djokovic the set 6-2 like the second set as he comfortably won the final of the completion in from of the 50% capacity crowd in cool conditions on Rod Laver Arena,

The top seed described Medvedev as one of the “toughest players I ever faced in my life” and paid tribute to the Russian’s promising future.

“It’s a matter of time when you’re going to hold a Grand Slam, that’s for sure … if you don’t mind waiting [a] few more years,” he laughed. (AO)