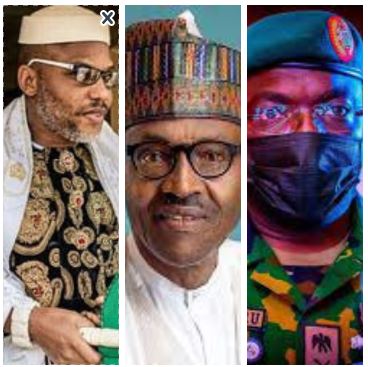 The leader of the Indigenous People of Biafra (IPOB), Nnamdi Kanu, has berated the President, Major General Muhammadu Buhari for failing to honour his late Chief of Army Staff, Ibrahim Attahiru during his burial on Saturday.

Recall that Attahiru and 10 other military personnel were involved in an ill-fated plane crash in Kaduna on Friday.

However the self-acclaimed Biafran activist, just like some concerned Nigerians, has expressed shock at Buhari’s absence at the burial which took place in Abuja.

Kanu expressed his disappointment on Saturday via his official Twitter handle.

“The absence of the masked up impostor in Aso Rock, Buhari version 4, at the burial of his own Chief of Army Staff ATTAHIRU, the mass murderer; is confirmation that indeed, “the Dead cannot bury the Dead”.

“Today, #Nigeria is as naked as Adam & Eve in the Garden of Eden. #Zoo” he stated.

The IPOB leader also made a cryptic mockery of Attahiru’s death, stating that those involved in the extermination of the Biafra race shall perish.

“When the righteous prosper, the city rejoices; when the wicked perish, there are shouts of joy”~Proverbs 11:10

“All involved in the ongoing extermination of the #Biafran race shall perish. For as they have made mothers childless, so shall their mothers be childless amongst women,” he wrote.