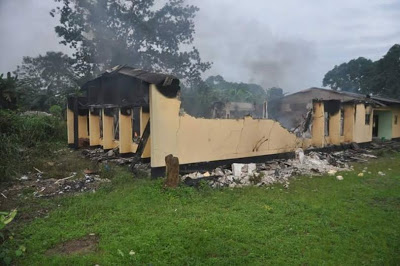 According to the PUNCH, Ezeonu alerted that the constant torching of the commission’s facilities would affect the 2023 election in the state.

Speaking during a press conference in the state on Thursday, Ezeonu disclosed that no fewer than eight offices of the commission in the state have been razed by hoodlums, ranging from the 2019 elections, the Endears protests and 2021 unrest in the state.

According to the electoral commissioner, the affected INEC offices include those in Ehime Mbano, Isiala Mbano, Ahiazu Mbaise, Ehinihitte Mbaise, Ngor Okpala, Njaba, Orlu and Isu Local Government Areas of the state.

Meanwhile, Ezeonu advised the residents of the state to take the opportunity provided by the commission in the nationwide ongoing Continuous Voter Registration exercise to get ready for the 2023 general elections.

He said ” this exercise was purposely designed to precede the resumption of the Continuous Voter Registration exercise so as to make new Polling Units available to voters. Today I am happy to inform you about the roll out of the online registration component of the CVR exercise on Monday, June 28, 2021.

“The proposed method will not eliminate the existing method rather it will provide an alternate method for those who have access to internet facilities, thereby reducing the inconveniences on voters and also reduces the number of voters that would have to queue up at our registration centers.

“It was the desire of the Commission to roll-out both the physical and online registration exercise at the same time but we are encumbered by the security challenges in the country.”