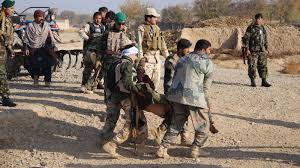 At least 27 members of Afghanistan’s security forces were said to have been killed in separate attacks in at least five provinces throughout the country, according to officials.

The militants attacked the soldiers’ quarters during the night in the Dasht-e Archi district and in an area in the provincial capital, Ayoubi said.

According to Ayoubi and another councillor, Aminullah Aydin, another seven were wounded in the attacks.

After the attack, the militants then kidnapped six policemen, Talaat added.

In a further Taliban attack in the northern Baghlan province, one police officer was killed and two more were wounded, officials said.

And in the capital of the southern Helmand province, a police officer was shot dead by gunmen, according to a provincial police officer.

A police officer was killed in a similar incident in the western Farah province, a police spokesman said.

And in another incident in the southern Uruzgan province, a motorcycle bomb exploded, wounding 10 people including two policemen, according to the provincial governor.

Despite ongoing peace talks between the Afghan government and the Taliban in Doha since mid-September, violence continues in Afghanistan. The Taliban has so far refused to accept a ceasefire.

The talks aim to end decades of war, but have not yet reached a breakthrough.