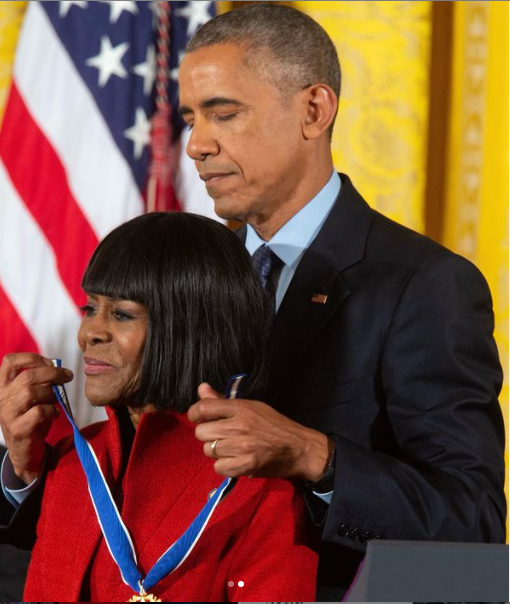 The 44th president of the United States of America, Barack Obama, and his wife Michelle have taken to their social media account to pay heartfelt tribute to the late legendary American actress, Cicely Tyson who died at 96.

On his verified Instagram page, Barack two pictures of Tyson, a picture where he gave her a medal of honour while he was president and the picture showed the late actress standing between him and his wife, Michelle.
In the caption section, the former president revealed that when Tyson was born, the doctors predicted that she will not live past three months.
“When Cicely Tyson was born, doctors predicted she wouldn’t make it three months because of a murmur in her heart. What they didn’t know, what they couldn’t know, was that Cicely had a heart unlike any other — the kind that would not only beat for 96 more years but leave a mark on the world that few could match.

“In her extraordinary career, Cicely Tyson was one of the rare award-winning actors whose work on the screen was surpassed only by what she was able to accomplish off of it.”

Barack further said that Tyson’s mother who was a house cleaner never allowed her to go to the movies. He noted that although the late actress wasn’t destined to be an actress, once she got educated, she broke boundaries.

“Cicely wasn’t exactly destined for Hollywood. When she was a child, her mother — a hardworking and religious woman who cleaned houses — didn’t even let her go to the movies. But once Cicely got her education, she made a conscious decision not just to say her lines but to speak her truth.

He continued, “At a time when parts for actors who looked like her weren’t easy to come by, she refused to take on roles that reduced Black women to their gender or their race. Sometimes, that meant she would go years without work. But she took pride in knowing that whenever her face was on camera, she would be playing a character who was a human being — flawed but resilient; perfect not despite but because of their imperfections. Across all of her performances, in legendary productions ranging from “Sounder” to “The Trip to Bountiful” to “The Autobiography of Miss Jane Pittman,” she helped us see the dignity within all who made up our miraculous — and, yes, messy — American family.”

Obama stated that it was an honour for his family to have hosted Tyson at the White House when she received the Medal of Freedom when he was the president of the United States of America.

“Michelle and I were honoured when Cicely came to the White House to accept the Medal of Freedom, knowing she was one of the many giants upon whose shoulders we stood — a trailblazer whose legacy couldn’t be measured by her Emmys and Tony and Oscar alone, but by the barriers she broke and the dreams she made possible.

“We are sending our thoughts and prayers to every member of Cicely’s family and to all of those who loved her. And while we are saddened that her heart finally came to a rest today, there is comfort in knowing that she will always live on in ours,” he said.

His wife, Michelle, also took to her Instagram account where she posted two pictures with the late actress; in the first picture she simply struck a pose with Tyson but in the next slide both women held each other in a deep embrace.
In her caption section, she wrote, “What struck me every time I spent time with Cicely Tyson was not necessarily her star power—though that was evident enough—it was her humanity. Just by walking into a room, she had this way of elevating everyone around her. She was the personification of beauty, grace, wisdom, and strength, carrying forward a flame that not only guided her for 96 path-breaking years but lit the way for so many of us. I’ll miss her dearly, but I smile knowing how many people she inspired, just like me, to walk a little taller, speak a little more freely, and live a little bit more like God intended.”

I have a girlfriend, stop sending silhouette challenge to my DM, Don Jazzy warns ladies