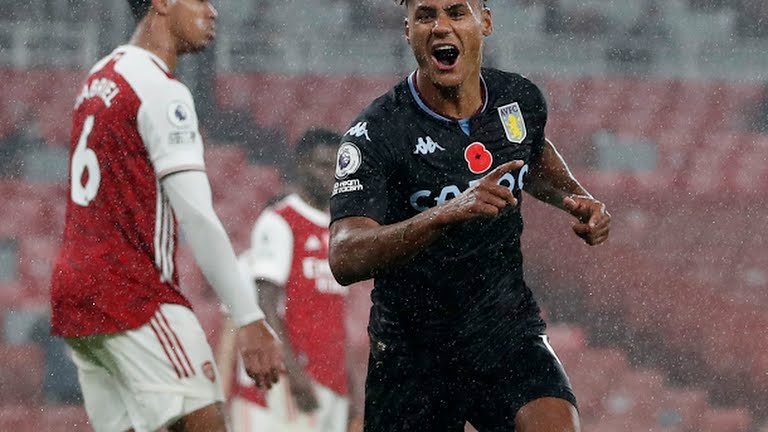 Mikel Arteta’s Arsenal side were stunned by Aston Villa in a shocking 3-0 defeat at the Emirates Stadium on Sunday night.

Coming from a morale-boosting away win against Manchester United at Old Trafford, the Gunners orchestrated their own downfall when Bukayo Saka gifted the away side a 1-0 lead with a 25th-minute own goal.

The home side were poor going forward on the night, managing only two shots on target against the Villans’ six out of 13 and 15 total shots respectively.

A fabulous powerplay by Grealish, Barkley and Targett broke into the Gunners’ box to leave young Saka in a tangle with Trezeguet and it is the latter who bundles it in under pressure, to Arsenal’s despair.

Jack Grealish has been directly involved in nine goals in the Premier League season (four goals and five assists) – only Spurs pair Harry Kane (15) and Son Heung-min (10) have had a hand in more productivity. – Optajoe

Although Arsenal edged on possession in the night, Dean Smith’s men got their figures where it mattered the most to get the all-important three points.

New signing, Ollie Watkins picked up from his hattrick in the 7-2 mauling against Liverpool to bag a brace in the space of three minutes.

The first came in the 72nd minute when Ross Barkley’s assist found the former Brentford striker’s head in the Brentford man in the six-yard box to put Villa in the driving seat.

Watkins put the game far from Arsenal’s reach three minutes late when captain Jack Grealish made a relentless run past his opponents to drag on a pass for his striker, who latches on in support and drills low past Leno.

Ollie Watkins has scored six goals in seven games for Aston Villa in the Premier League this season; only Dean Saunders (7) and Dion Dublin (9) have ever netted more in their first seven appearances for Villa in the competition. Flyer. – Optajoe

Aston Villa have now won each of their first three away league games in a season for the first time in their history, handing Arsenal their worst home league defeat since December 2019 versus Manchester City (also 0-3).
According to Optajoe, Arsenal have scored just nine goals in eight Premier League games this season; their fewest at this stage of a league campaign since 1998-99 (also nine).

Related Topics:ArsenalAston Villa
Up Next