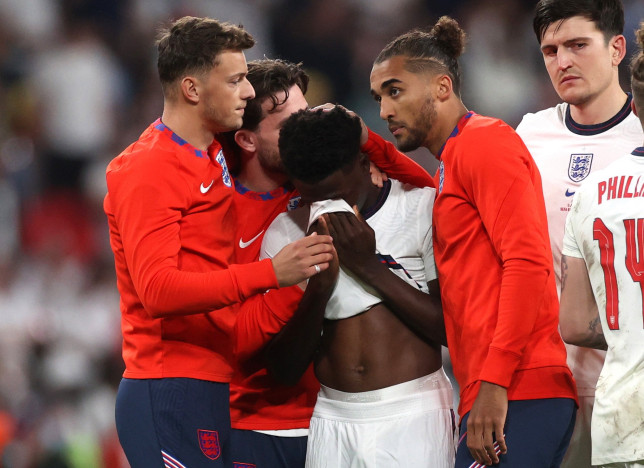 Arsenal manager, Mikel Arteta, has remained optimistic that young England international, Bukayo Saka, would bounce back from the EURO 2020 disappointment.

WuzupNigeria reported that the 19-year-old was targetted by online racial trolls alongside Jadon Sancho and Marcus Rashford after missing their penalties in the competition’s final against Italy on Sunday.

The disappointment left the youngster devastated as he broke down in tears while his Three Lions teammates including manager, Gareth Southgate, consoled him, as England failed to end their 55 years wait for a major international trophy.

However, Saka’s club gaffer, Arteta, in an interview with Sky Sports, said that the youngster doesn’t deserve the harsh treatment from racists who have targetted him and his black England teammates following the defeat.

Asked if he had personally spoken with Saka following England’s defeat in the final, Arteta said: “Yes, I have. We all have, I think, spoken to him, sent messages.

“He will be fine. He is such a strong character. He has received a lot of love and support from world football, not only with Arsenal but the national team and all the English fans because he doesn’t deserve anything like [what] he has been through.

“He has had a phenomenal season.

“In football, you want to be part of the greatest, you have to know today, at 19, that you lose more than you win unfortunately in this game and there are no exceptions to that rule.”