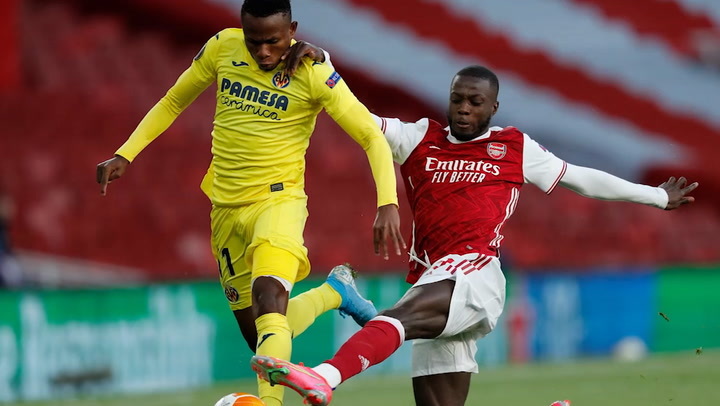 London club, Arsenal, has crashed out in the semi final of the Europa League failing to beat Villareal at home.

Gabonese international and captain of the English team, Aubameyang, came closest for the Gunners with two clear cut chances as the first half ended in a stalemate.

Super Eagles and Villareal forward, Samuel Chukwueze, was stretchered off and replaced by Yeremi Pino.

The winger was in blistering form as Villareal tormented Mikel Arteta’s Arsenal in the first 45 minutes of the game.

At 76 minutes, Arsenal began to increase the tempo just as Martinelli runs on to a loose ball before wasting the chance.

With barely eight minutes to go, Tierney and Aubameyang were replaced by Willian and Lacazette.

As tension rise for the Gunners, the referee books Pino for not knowing his place just as he booked Mari who conceded a freekick after bringing Pino to the ground in the process.

As Arsenal continued to mount pressure on the Villareal side, Alberto Moreno was replaced by Pedraza.

Nketiah bags a yellow card just seconds after getting on the pitch for bumping into an opponent.

Villarreal, on the other hand, manage to put up a wall preventing Arsenal from working up anything close to a storm.

Villareal are assured a place in the final after their 2-1 against the Gunners in the first leg.

The day ended as a momentous one for Villarreal who have never previously reached a European final yet somehow managed to look like old hands today.