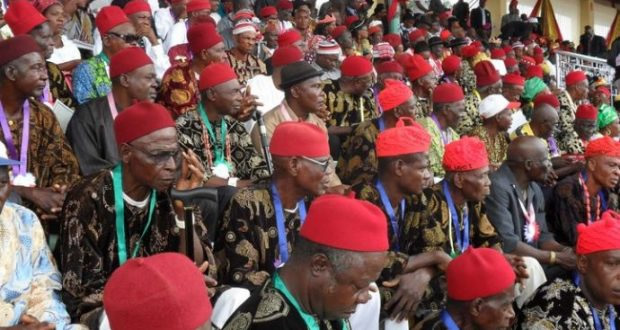 President Muhammadu Buhari has been called on by the Ohanaeze Ndigbo Youth Council to appoint an Igbo as his new Chief of Staff.

OYC in a statement on Sunday, they described the death of Abba Kyari, as a “colossal loss”.

The group in a statement released through Okechukwu Isiguzoro, OYC President and Okwu Nnabuike, the Secretary, prayed God to give Buhari the fortitude to bear the demise, grant Kyari’s soul mercy and forgive his shortcomings.

OYC called on President to “look inward, make amendments and clear doubts about his stance as the father of Nigeria” by appointing replacement from the Igbo speaking areas of Niger-Delta or South-East.

The group noted that there are capable and trusted allies of the president since his entrance into politics in 2003 till date.

It further stated that an Igbo Chief of Staff will unite the country, end secessionist movement in the South, add transparency to governance and ensure strategic stability of the economy.

“This is the most patriotic but rare opportunity for President Muhammadu Buhari to heal Nigeria from disintegration and collapse. In retrospect, it was an Igbo who masterminded the amalgamation of defunct political parties to merge into APC.”

Ohanaeze Youths added that the Nigerian leader can “rewrite history by being contradictory to predictions and prove his legitimate political sagacity through the appointment of an Igbo from anywhere as the new Chief of Staff, even from the opposition party,” OYC said.

MORE READING!  JUST IN: After 32 days in custody, court grants bail to detained Sunday Igboho’s aides
Related Topics:BuhariChief of staffFeaturedigboKyariOhanaeze
Up Next