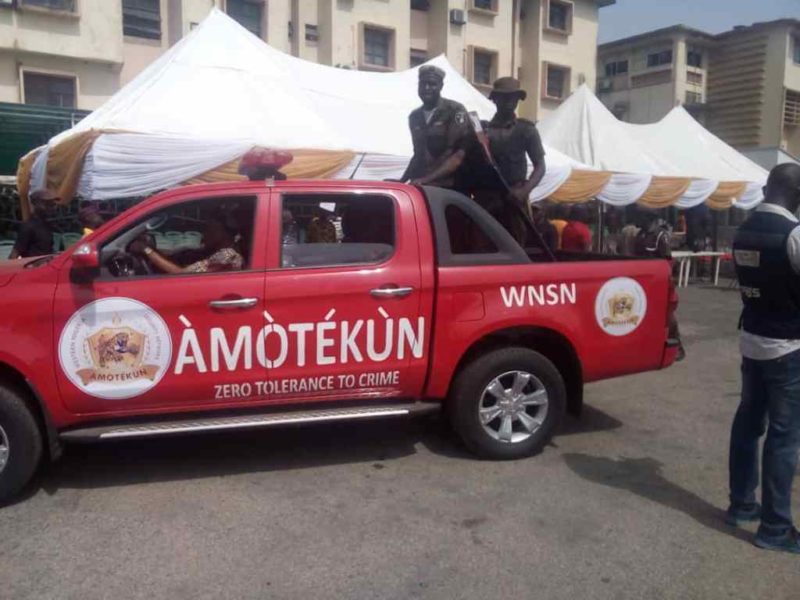 The two joined different groups under the auspices of Yoruba World Congress to stage a solidarity rally in support of Operation Amotekun in Ado Ekiti, the Ekiti State capital, according to The Nation.

WuzupNigeria further reports that ‘Ijoba’ and ‘Ayo kolokolo’ joined the solidarity march at Okesa Junction and were welcome by stakeholders amidst enthusiasm.

Participating in the solidarity rally were members of the Ekiti State Council of Elders, Vigilante Group of Nigeria, Agbekoya, Odua’s People Congress, Hunters Group of Nigeria and some civil.

Also in the rally were members of the National Association of Nigerian Students (NANS), Vigilance Group of Nigeria, Yoruba Koya, Man ‘O War, Oodua Union, and Ekiti Council of Elders.

The participants converged at the popular Fajuyi Park in Ado-Ekiti, the state capital around 7: 30am and took off for the rally around 10:45am.

They took a long walk from Fajuyi park through Okesa junction, Ojumose to the popular Erekesan market and Ijigbo junction all within Ado-Ekiti metropolis, with the participants chanting solidarity songs in support of ‘operation Amotekun’.

MORE READING!  Wizkid to drop 'Made In Lagos' album

The participants were accompanied on the march by the police, operatives of Department of State Security [DSS] and their counterparts from the State Security Service [SSS] and Nigeria Security and Civil Defence Corps [NSCDC].

It was a general consensus among the stakeholders that the Amotekun initiative has berthed permanently in the southwest region and that it was not formed to fight Fulani herdsmen, except the unruly and destructive ones.

Speaking with newsmen at Fajuyi park before the march moved to other parts of the state capital, Coordinator of the rally, Pastor Praise Ayodele, said the joint security arrangements was a child of necessity to check the high incidences of kidnapping, banditry, and other security challenges facing the southwest zone.

“Amotekun has come to stay in the southwest Nigeria. We are not fighting anybody. The security of our people is very important. We are to do this to support our governors that we are happy with Amotekun.

“It is sad that our people were being killed and kidnapped and many of these carnages were without arrests. We are daily in fear of being killed and these and many more are the reasons for the formation of Amotekun.

“On the proscription of Amotekun by the Attorney General and Minister of Justice, Abubakar Malami, we are of the opinion that the Minister only expressed himself as a private citizen who is entitled to his own opinion.

“We charged our governors to remain focused, we advise our leaders to desist from politicising Amotekun and that our security should be of priority”, he said.

Ayodele urged all stakeholders in the region to support the security initiative since it was purposely fashioned to complement the conventional security architectures in ensuring the safety of lives and property.

“The Amotekun is for easy identification of all visitors to Ekiti and southwest. It is sad that Malami made pronouncement over issue he knew nothing about. He spoke as if he didn’t know the level of insecurity in this zone.

“Some of these evildoers besieged even our towns, killed the people and destroyed everything on the farm. Amotekun will work in their localities and it is not about fighting anybody”.

Similarly, the Coordinator of Oodua Union, Hon Femi Robinson and leader of Ekiti Hunter, Chief Taiwo Bamisile pointed out the need for a local security formation that respond to the security threats pervading the Yoruba’s nation since the conventional security agencies have failed to guarantee the security of lives and property.

The leaders of Agbekoya and Vigilance Group of Nigeria, Chief Sunday Omoyajowo and Mrs Suwebat Aliu respectively, said the southwest leaders maintained a united posture about Amotekun and that nothing will change this stance, adding that

“Amotekun won’t render the police useless, because security is a function of everybody, so we appreciate our governors for this initiative”.

The Secretary General of Ekiti Council of Elders, Chief Niyi Ajibulu, regretted that people can no longer move around as a result of increased insecurity, saying the current situation occasioned the need for the formation of Amotekun’ as a pramatic regional approach to tackle the menace.

“We have to be vigilant in this zone. Amotekun has landed and we must cooperate with them. Whoever that is averse to the formation of this outfit is satanic,” he said.