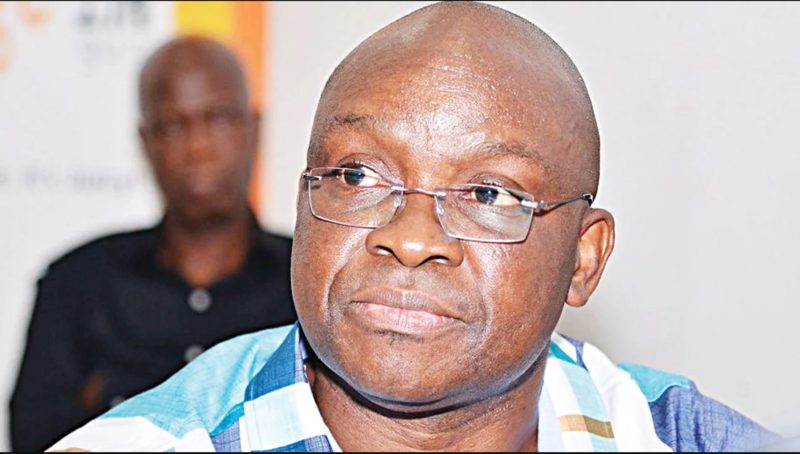 A Federal High Court in Lagos has adjourned the alleged N2.2bn fraud trial of a former Ekiti Governor, Ayodele Fayose, till October 19 and 20 following the absence of an Economic and Financial Crimes Commission (EFCC) witness.

EFCC counsel Rotimi Jacobs (SAN), who applied for an adjournment, told Justice Chukwujeku Aneke his eighth witness was having difficulty coming to court “because of happenings” at the Commission.

Jacobs did not elaborate but there was a recent shake-up at the anti-graft agency resulting in the suspension of its acting Chairman, Ibrahim Magu and several other key staff.

According to the 11-count charge, Fayose and one Abiodun Agbele were accused of taking possession of N1.2 billion on June 17, 2014, to fund his gubernatorial election campaign in Ekiti, “which sum they reasonably ought to have known formed part of crime proceeds.”

Fayose was alleged to have received a cash payment of $5 million (about N1.8 billion) from a former Minister of State for Defence, Senator Musiliu Obanikoro, without going through any financial institution and which sum exceeded the amount allowed by law.

He was also alleged to have retained N300 million in his bank account and took control of about N622 million which sum he ought to have known formed part of crime proceeds.

The former governor was also alleged to have procured De Privateer Ltd and Still Earth Ltd to retain N851 million in his bank account, which they reasonably ought to have known formed part of crime proceeds.

Besides, the defendant was alleged to have used about N1.6billion to acquire property in Lagos and Abuja, which sums he reasonably ought to have known formed part of crime proceeds.

The defendant was also alleged to have used the sum of N200 million, to acquire a property in Abuja, in the name of his elder sister Moji Oladeji, which sum he ought to know also forms crime proceeds.

Fayose and his firm Spotless Investment Ltd pleaded not guilty.