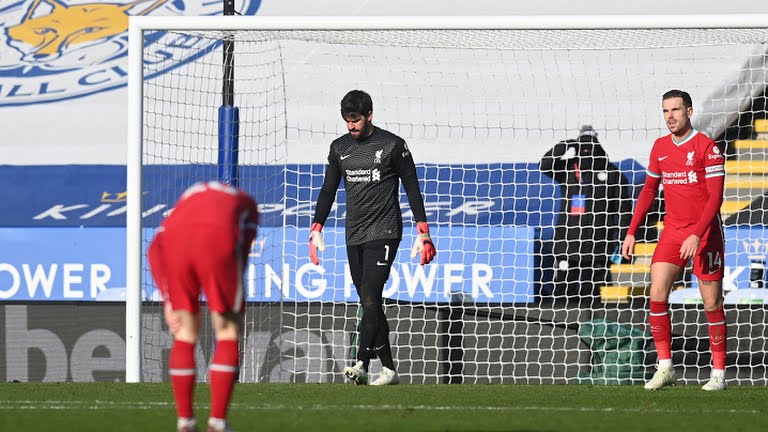 Liverpool’s goalkeeper, Alisson Becker’s horror show helped Leicester City come from a goal down to secure a 3-1 win at the King Power Stadium.

Jurgen Klopp’s men were hoping to bounce back from three straight home defeats to Burnley, Brighton, and recently, Manchester City, thanks to Alisson’s blunder.

Mohammed Salah gave the Reds an all-important lead in the 67th minute after a goalless first half as Ozak Kaban made his debut for Liverpool after joining from Schalke 04 on January window’s deadline day.

The lead did not last longer than 11 minutes as the Foxes pulled level through midfielder, James Maddison’s 78th-minute freekick.

The defending champions self-destruct in the 81st minute through a miscued kick by Alisson following a miscommunication with Kabak, leaving Jamie Vardy who struck the bar in the first half to score with an open net.

Harvey Barnes made it 3-1 four minutes later late to seal the win for Brendan Rodgers’ side as they move second on the log.
The Reds face RB Leipzig next for the first leg of the Champions League Round of 16 clashes on Tuesday before a Merseyside derby clash against Everton on Saturday.

Team trophies come before the individual ones, says Salah after winning Goal of the Month