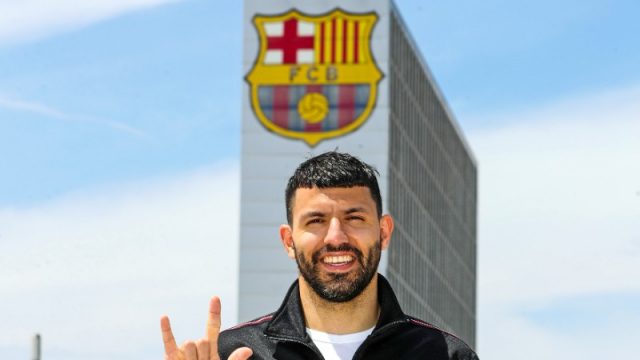 Barcelona on Monday announced the signing of former Manchester City and Argentina striker, Sergio ‘Kun’ Aguero, on a free transfer.

Aguero whose contract with City expires on July 1 would join the Blaugrana immediately from the Etihad tomorrow, a club statement said.
Barca also revealed that Aguero who joined for free has a buyout clause of 100 million euros should he decide to level the club having agreed to sign a two-year contract with the club.

The statement read: “FC Barcelona and Sergio ‘Kun’ Agüero have reached an agreement for the player to join the Club from 1 July when his contract with Manchester City expires.

“The player will sign a contract until the end of the 2022/23 season and his buyout clause is set at 100 million euros.

The Argentine joined City in 2011, becoming the club’s record goalscorer with 258 goals in 387 appearances in all competitions.
He is also fourth on the Premier League’s all-time top scorer’s chart with 182 goals behind Alan Shearer (260), Wayne Rooney (208) and Andy Cole (187).