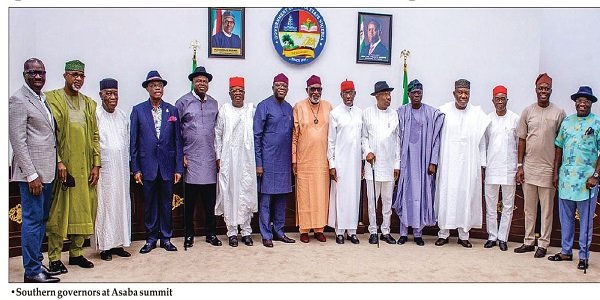 All 17 Southern governors will converge in Lagos State on Monday for a follow-up meeting to the one held in Asaba, Delta State on May 11.

Sources privy to the meeting said that it was called to review the state of the nation as it affects the three geo-political zones, with the welfare of the people of Southern Nigeria taking the central stage.

The meeting which will be hosted by Governor Babajide Sanwo-Olu, sources further revealed, is to further articulate collective interest and reiterate commitment to a united Nigeria capable of guaranteeing equity, fairness and justice in an atmosphere of true federalism.

Another source who spoke on the condition of anonymity said the Lagos meeting is being called to discuss how to actualise critical resolutions reached during the historic Asaba meeting, The Nation reports.

It would be recalled that a meeting of the governors was held recently in Asaba, the Delta State capital.

The six governors in the South-West governors had on Friday convened an emergency meeting on current national issues.

The governors, it was gathered, met virtually and discussed sundry issues, including the raid by operatives of the Department of State Services (DSS) on the Ibadan residence of Yoruba activist, Sunday Adeyemo, aka Sunday Igboho.

The meeting was chaired by Akeredolu, who is the chairman of the governors’ forum in the zone.