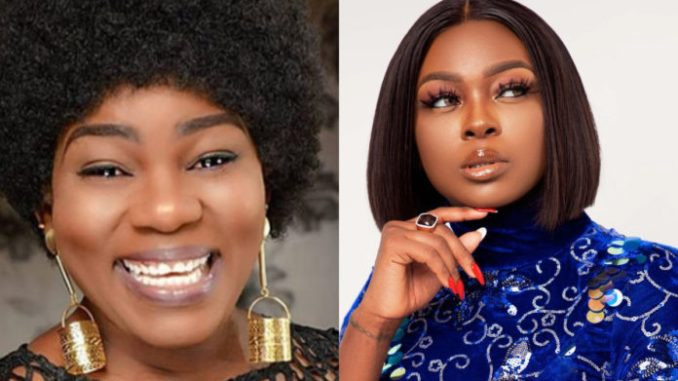 Veteran Nollywood actress, Ada Ameh, has blasted BBNaija star, Ka3na for berating a fan who she instigated to tattoo her name on her tie.

Recent trends in the country has seen fans take their celebrity love to another level such as getting names and faces of their favourite celebs on their bodies.

The former BBNaija housemate took to her social media handle to seek a loyal fan who would tattoo her but she made a u-turn after a fan heeded to her call.

“Who will tattoo the BossLady on their body nau #Bossnation, over to you,” Ka3na wrote on social media.

Angered by Ka3na act, Mrs Ameh called her “stupid” and described her move wicked, in a video posted on her Instagram page on Wednesday.

She said: ”You went on Twitter and you wrote something that you would have loved someone to have a tattoo of you on their body and this young lady did.

You came, did a video and you were all flirting with your hair and you were being sarcastic and that was very wicked of you.

You know yourself.  After this video those people that know her will tag her because I know she can never talk to me because she can’t even dare it because if she dares it, she will know that all of us ‘get equal level but crase get category’.

My point exactly is simple. You don’t know that a lot of people look up to us. Some people can crazily love you to a very destructive point. You encouraged her. She tattoed you and at the end of the day you came and you said it was wrong..you were giving instances, I couldn’t even finish it because I was so angry. I wish Instagram had a place you could just send a voice note , I would have done that to that stupid girl”