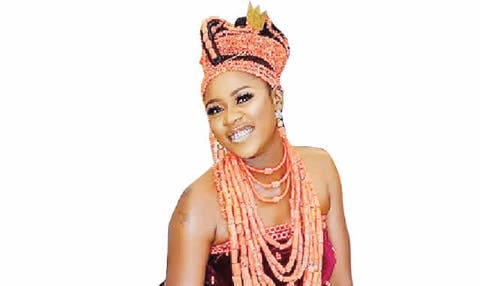 Actress, Olayinka Solomon aka Ogo Mushin has reacted to rumours that the new house and car she recently launched were bought for her by MC Oluomo.

Speaking to Sunday Scoop, Ogo Mushin said that the house was not bought but that she built it herself.

She said, “I am a mother with three kids, though one is adopted. This is not my first house. This one is just special because the others are occupied by tenants. Last year, when I unveiled my second house, it also went viral. I think what made this a buzz on social media was because I also got a car as a birthday gift that same week. People are wondering how actresses are building houses and I find that hilarious. Young ladies who are not actresses or celebrities also build big houses but because they are not popular, people don’t talk about them. As individuals, we use our money for different purposes.

“My father was a building contractor and even before I thought of building my house, I was already a landlady, thanks to him. I also have other businesses that fetch me money. I believe that everything is achievable. I did not buy a house in Banana Island, so I don’t think I have outdone myself.

“Some people claimed that MC Oluomo bought the house for me but does the house look like it was bought? I built it myself though I don’t think I owe anybody any explanation. Maybe his (MC Oluomo)’s personality makes people assume things. Some of those comments are even from private accounts and I cannot fight invisible people. I am a very religious person and I’m not flashy, hence people cannot know my worth. I am not a broke girl.”

Solomon also maintained that she continued to associate with Mushin because she was proud of her roots. She said, “I was born and brought up in the Mushin area of Lagos. It is good to be proud of one’s roots. Some people dissociate themselves from a place like Mushin but I am doing fine and I don’t have a bad record. So far, I have not regretted using the ‘Ogo Mushin’ slogan as part of my identity.”

MORE READING!  Chadwick Boseman's wife files probate petition in absence of a will
Related Topics:FeaturedMC OluomoOlayinka Solomon
Up Next

Why I don’t get upset – Don Jazzy

#ENDSARS: Hold Enugu Government responsible if anything happens to us- Flavour