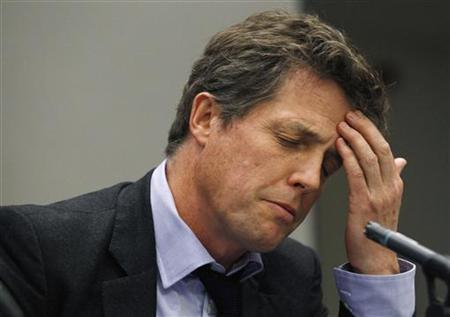 Golden Globe award-winning British actor, Hugh Grant has opened up on his battle with the deadly coronavirus after testing positive in February.

60-year-old Grant who tested positive alongside his wife Anna Eberstein spoke on The Late Show with Stephen Colbert on Tuesday night.

Having recovered earlier this year, Grant revealed that he totally lost his sense of smell during the period and soon began to panic as a result.

“It started as just a very strange syndrome where I kept breaking into a terrible sweat. It was like a poncho of sweat, embarrassing really,” recalled Grant. “Then my eyeballs felt about three sizes too big and this feeling as though some enormous man was sitting on my chest, sort of Harvey Weinstein or someone.”

“I thought, ‘I don’t know what this is,’ and then I was walking down the street one day and I though, ‘I can’t smell a damn thing,’ and you start to panic,” he added.

Grant said he began “sniffing flowers” to be certain he had the telltale symptom, and still couldn’t pick up a scent. “And you get more and more desperate — I started sniffing in garbage cans. You know, you want to sniff strangers’ armpits because you just can’t smell anything.”

“I eventually went home and sprayed my wife’s Chanel No. 5 directly into my face. Couldn’t smell a thing, but I did go blind!” he joked.

He revealed that he discovered his barbing skills during a period of quarantine with his young kids last month, according to People.

“I started by cutting my daughter’s Barbie’s hair out of sheer boredom, and I discovered I was extremely talented,” he told Good Morning America at the time. “Then I started cutting my children’s hair, whether they wanted a haircut or not. I just strapped them to a chair and cut their hair.”

Related Topics:Hugh Grant opens up on COVID-19 battle
Up Next