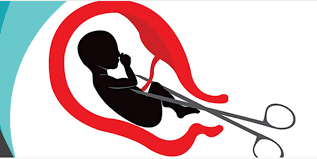 A Non-Governmental Organisation, Anti Abortion Movement of Nigeria (AAMN) has called for the creation of Pregnancy Crisis Centre by the government to reduce abortion rates in the country.

The Kwara Coordinator of AAMN, Light Olubo, made the call on Thursday after the movement held a pro-life walk in Ilorin against abortion.

Olubo told the Newsmen that the number of children killed by abortion was at an alarming rate and Nigeria should help reduce the tally by having the centre also known as ‘Shelter’.

She said the walk was to campaign against abortion especially as valentine approaches which make people indulge in sex leading to unwanted pregnancies.

”We are campaigning against abortion which we always do annually, every Feb. 11.

”Abortion does not promote peace but it destroys life. Globally, over 45 million of babies are killed through abortion which is alarming.

”We are here to tell the society and the nation that abortion has so many implications; immediate, short term and long term.

”So, we want the government to establish PCC otherwise known as a shelter for women having gender-based issues where they can run into and be received with love and also be safe.

”This will reduce the emergence of baby factories across the country. People will be able to go there to adopt and give out children for adoption to,” Olubo said.

She also pleaded with the government not to legalise abortion as done in some countries as it would drag the country back in terms of morality.

”We don’t want abortion to be legalised in Nigeria, because, whoever practices or encourages abortion is a murderer.

”We want the government to promote the law that enforces stiff penalties on those committing abortion.

”The youths should understand that abstinence is an important way to prevent abortion for unmarried people.

”And for the married, they should be on birth control method instead of waiting to get pregnant and abort later to avoid shedding innocent blood,” she advised.

The AAMN state coordinator also appealed to the Nigeria Medical Association (NMA) to enforce sanctions on hospitals carrying out an abortion.

She added that all stakeholders, including parents, teachers and religious leaders, have a role to play in ensuring the society is free from abortion.

The Founder, Children Evangelism Ministry, Tony Chukwudile, said people should give children a chance to live and stop committing one of the greatest sins.

”We are here to tell Ilorin people to stop abortion because valentine is coming in few days time and a whole lot of young people are ready to offer free sex which results to pregnancy that they will want to abort.

”So, we are saying that peradventure they get pregnant, they should give the children the chance to live,” he said.

Mrs Funmi Olutimeyin, a worker at the ministry, said there was no excuse for abortion and the government should not in any way legalise the evil act.