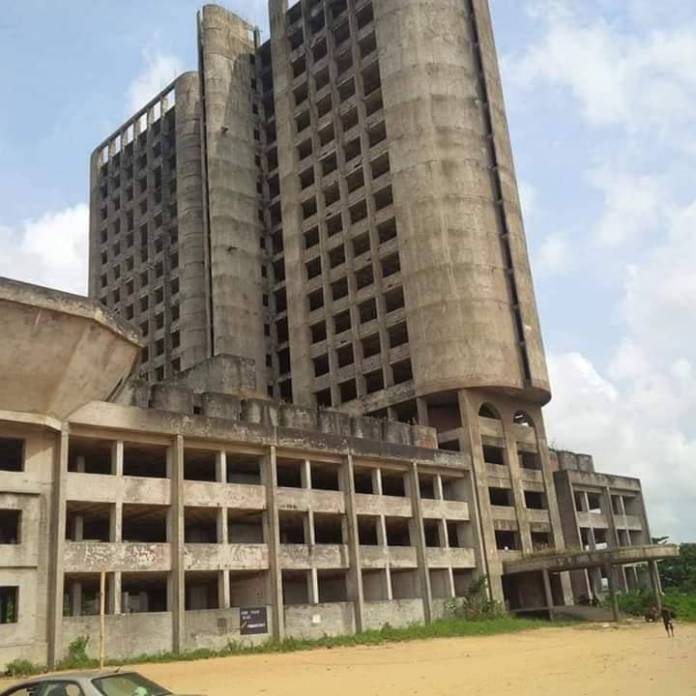 A long forgotten 18-storey building popularly known as ‘Abacha House’ in Era town of Otto-Awori Local Council Development Area in Lagos has allegedly been taken over by suspected ritualists and criminal elements.

The 43-year-old gargantuan building is accessible from the Lagos-Badagry Expressway.

Right from the entrance of the building, human skeletons are either drawn or engraved on the walls.

Some community leaders told reporters that criminals of different shades often converge at the spot while teenage girls have allegedly been raped.

MORE READING!  VIDEO: Ooni of Ife in disbelief as Olori Naomi prays the palace be filled with more queens

Further findings by our correspondent revealed that the construction of the 18-storey building which started in 1978 by the military administration of Gen. Olusegun Obasanjo, is yet to be completed 43 years after.

What was left of the building are the concrete walls of the structure as most of the land acquired by the military administration of Obasanjo has been sold to unsuspecting members of the public by land grabbers.

A community leader in the area, Taiwo Fadile, disclosed that robbers, ritualists as well as local fraudsters now use the uncompleted house to share booty and also plan their attacks on unsuspecting members of the public.

Fadile said the house is tagged “Abacha house’ by members of the community because it is believed that only the strong and mighty could venture into the building which also has three floors below ground level that serves as basement.  Violent crimes as well as mystery activities are what go on inside.

He said, originally, the building rested on two acres of land located at Iyana Era, along Badagry Expressway, off Ijanikin, Lagos State.

“Going by the name, recent settlers believe that the building is allegedly owned by the late former Head of State, Gen. Sani Abacha but it belongs to the Ministry of Agriculture. It is now an abandoned property that is only good for criminals,” he added.

Interestingly, not too far from the building are two white garment churches as well as a mosque.

Another resident, Kayode Oludamilo said most rape cases are traceable to activities around the house.

“In 2012, a security man (night guard), Moshood Afolabi, was found dead in that 18 storey building after four days of fruitless search by members of his family to locate his whereabouts. The leader of the vigilante group where he worked alerted both the police and other security agencies, who immediately started investigation and combing the area. After investigation, the police later revealed that the abandoned building had become a notorious hideout for criminals in the area,” he said.

Residents of the area, who pleaded not to be named for fear of the unknown, said that criminals normally shared their loot inside the uncompleted building.

Related Topics:Abandoned ‘Abacha House’ taken over by suspected ritualistsFeaturedhoodlums in Lagos
Up Next