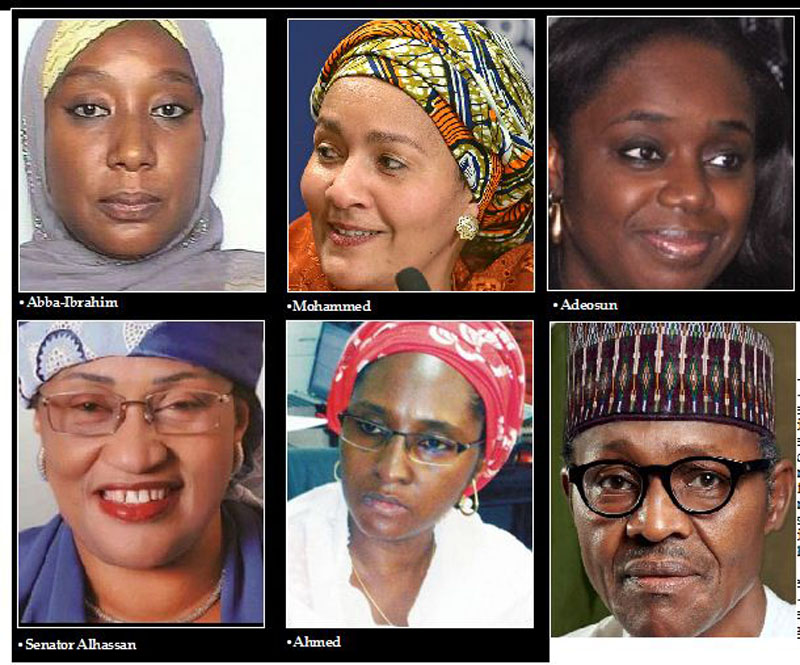 Behind every successful man, there is a good woman. So goes the popular saying. Many times it has proved true. In the President Muhammadu Buhari led administration, there are women of powerful influence.

Here are the seven most prominent of them:

A lawyer by training and the first woman to be appointed Attorney General of Taraba State, Aisha Alhassan, is Nigeria’s Women Affairs Minister. She was also the All Progressives Congress candidate in the 2015 governorship election in Taraba State. A sports lover, she actively supports the Taraba State Football Association in several ways. Stylish in her own way, Alhassan, clearly favours colourful prints and scarves in breathtaking designs. Known for her signature red lipstick and well-manicured nails, the light-skinned beauty is fashionably elegant. Blessed with an impressive height and a beautiful smile, it isn’t difficult to spot her in a gathering of equally stylish women.

A dynamic politician, Khad1ja Bukar Abba Ibrahim served two terms as a legislator representing Yobe State. As Minister of State for Foreign Affairs, she brings to bear her wealth of experience having previously served as Commissioner for Transport and Energy in Yobe State for three years. A Business Studies and Sociology graduate of Roehampton Institute of Higher Education, an affiliate of the University of Surrey, soft-spoken Bukar-Abba is a silent achiever. During her first tenure as a legislator, she was Deputy Chairman of both the House Committee on Rural Development and House Committee on Communication. She was also was a member in the Power, Water Resources, Interior, Appropriation, Electoral Matters, Banking, Petroleum, Police Affairs, and Constitution Review Committees. A conservative dresser, she loves to wear pastel-coloured outfits and also keeps her make-up sweet and simple.

Beautiful Amina Mohammed is Nigeria’s Minister of Environment. Recognised for her role as a Special Adviser on Post-2015 Development Planning to the United Nations Secretary-General, Ban Ki-Moon, she is vibrant and hard working. Mohammed worked as a Senior Adviser on Millennium Development Goals to three different Presidents of Nigeria between 2000 and 2014. She has served on several international advisory boards and panels including the Bill & Melinda Gates Foundation. She worked in the United Nations Millennium Project as a Coordinator of the Task Force on Gender and Education for the United Nations Millennium Project. Blessed with a flawless complexion, her style can best be described as classic and refreshing.

Aisha Abubakar (Minister of State for Trade, Industry and Investment)

An alumna of the University of Leeds, Aisha Abubakar, is the Minister of State for Trade, Industry and Investment. A black beauty, she was the Managing Director/CEO, Abuja Enterprise Agency. A technocrat and international banker, Abubakar has also held managerial positions at the African International bank and African Development Bank. Unassuming and humble, she has over 20 years experience in banking and investment, rural enterprise development, policy analysis and business support. A lover of beautifully tailored Ankara outfits, she also wears minimal make-up and classy jewellery.

Nigeria’s Finance Minister Kemi Adeosun speaks after the inauguration of the Efficiency Unit during an exclusive interview with Reuters in Abuja, Nigeria, November 30, 2015. REUTERS/Afolabi Sotunde

As Nigeria’s Minister of Finance, there is no disputing the fact that Kemi Adeosun, is a thoroughbred professional. A London-trained economist, asides her pedigree and track record, one thing you cant take away from this mother of three, who commenced her career as an accounting assistant at British Telecom Company, London, is her simple dress sense and signature hairstyle. A former Commissioner of Finance in Ogun State, she has extensive experience in the private sector, having previously held key managerial positions at prestigious firms such as PricewaterhouseCoopers and Chapel Hill Denham Management. Not a fashion freak, Adeosun, 47, who has been married for 22 years obviously favours a shoulder-length wavy hairstyle and subtle make-up which has become her trademark look.

Zainab Ahmed (Minister of State for Budget and National Planning)

As Minister of State for Budget and National Planning, Zainab Ahmed, is clearly an authority in her field. Of a charming personality, she has a commendable track record in the public service space, holding key managerial positions at institutions such as the Nigeria Mobile Telecommunications and Kaduna Investment Company. As the Executive Secretary of the Nigeria Extractive Industries Transparency Initiative since October 2010, Ahmed, made quite an impact at the agency. Her sound personality is reflected in her dressing. Bespectacled, Ahmed rarely wears make-up, but, when she does wear, it is very minimal and blends perfectly with her skin tone.

Pretty and unassuming, Winifred Oyo-Ita is the Head of the Civil Service of the Federation. A native of Adiabo community of Odukpani Local Government Area of Cross River State,Oyo-Ita had her secondary education at Queens College Yaba. After her secondary education, she got admission into the University of Lagos, where she studied and obtained a B.Sc in Accounting. She also holds a master’s degree which she obtained from the Nasarawa State University.

After several years in the service of the government of the federation, Oyo-Ita became the Director, Finance and Accounts at the Head of Civil Service of the Federation. On October 21, 2015, President Muhammadu Buhari announced the appointment of Oyo-Ita as the Head of the Civil Service of the Federal Republic of Nigeria. She also serves as the Permanent Secretary of the Ministry of Science and Technology. Prior to her appointment as the Permanent Secretary in the Federal Ministry of Science and Technology in April 2014, Oyo-Ita was the Permanent Secretary in the Federal Ministry of Special Duties and Intergovernmental Affairs. A fellow of the Institute of Chartered Accountants of Nigeria, she loves to wear Ankara and favours the afro hairstyle.