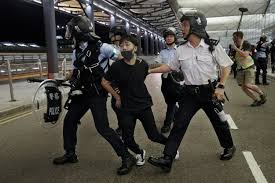 The Hong Kong police on Wednesday said they have arrested seven people suspected of conspiracy to launder money and other crimes, which involved 6.3 billion HK dollars (about $813m).

MORE READING!  Aisha Yesufu's A1 reaction to Sowore’s arrival in court with herbalist

The group successfully opened 14 corporate accounts and processed about 6.3 billion HK dollars of suspected crime proceeds between 2017 and 2020.

The police said the case was still under investigation and would not rule out more arrests.

MORE READING!  Woman, 64, gives birth to twins, loses custody after being ruled unfit to care for them
Related Topics:arrestedHong Konglaundering
Up Next