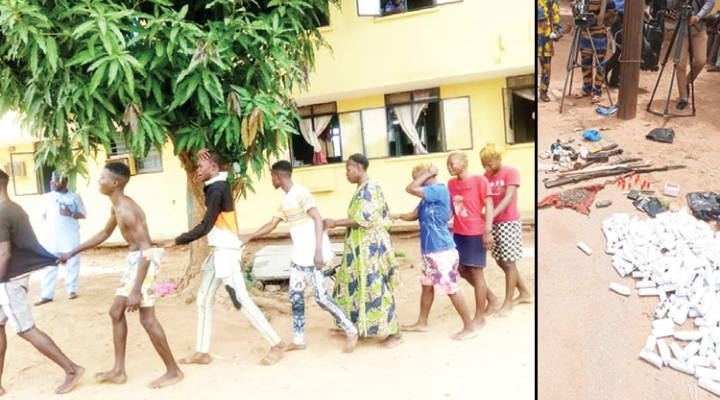 No fewer than sixteen persons suspected to be members of the Eiye and Site confraternities in Oloje/Okoolowo area of Ilorin have been arrested by the Kara State Police Command.

Parading the suspects at the command headquarters in Ilorin, the state Commissioner of Police, Mr Mohammed Bagega, said the suspects, consisting of 12 males and four females, were arrested while on a revenge mission in the area.

“We immediately dispatched the newly created anti-cultists team, in collaboration with the vigilantes, to storm the area before they struck.

“The effort paid off as 16 suspected cultists, males and females, wielding weapons, including guns, machetes, axes, charms, wraps of weed suspected to be Indian hemp, and other items to be used in the foiled attack, were arrested,” he added.

Bagega claimed that the suspects, in their statements, confessed to being members of the two cults.

He said, “If not for our effort, they would have unleashed unmitigated terror on residents and we all know their trademark, death.”

However, one of the suspects, Asake Azeez, denied being a cult member, saying he only sold Indian hemp at Mandala village, a suburb of Ilorin.

He said, “I don’t belong to either Aiye or Eiye. I learnt barbing, but when I did not have anybody to set up a barber’s shop for me, I started selling Indian hemp at Mandala village. I use what I realise from the sale to feed my wife, three children and my brothers, who are living with me. I don’t know these boys and girls arrested by the police.”