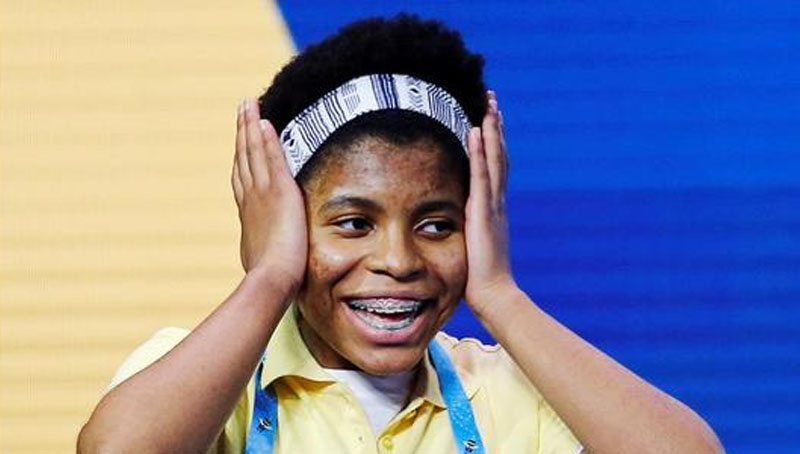 Zaila Avant-garde, a 14-year-old schoolgirl from the state of Louisiana, created history as the first African-American contestant to have won the US National Spelling Bee crown on Thursday.
Her winning word was ‘murraya’ – a genus of tropical Asiatic and Australian trees having pinnate leaves and flowers with overlapping petals.

The achievement saw her break the Indian-American community’s 13-year hold on the trophy that the immigrants had come to see as their stamp of arrival in the United States, Hindustantimes reports.

Avant-garde who had emerged as a popular contestant with quick and easy repartees with the competition’s long-time pronouncer Jacques A Bailly, beat Chaitra Thummala, the last of the Indian-Americans in the finals of the 93rd Spelling Bee, who got the compound word – neroli oil – wrong. Neroli oil is known to be a type of essential oil that is extracted from the flowers of bitter orange trees.

Balu Natarajan was the first Indian-American winner of the Spelling Bee way back in 1985.

Indian-Americans have won many spelling bee crowns subsequently since 2008. Their unrelenting hold on the competition has been the subject of popular documentaries.

Asked about her victory, Avant-garde said, “I mean, I was a bit surprised.”

“I had been warned about the confetti,” she said, referring to the celebration. “But I didn’t quite understand what they meant, so that was a bit surprising.”

Nine of the 11 finalists were Indian-Americans who have dominated the contest for more than a decade now.

The contest was cancelled last year due to the coronavirus pandemic.