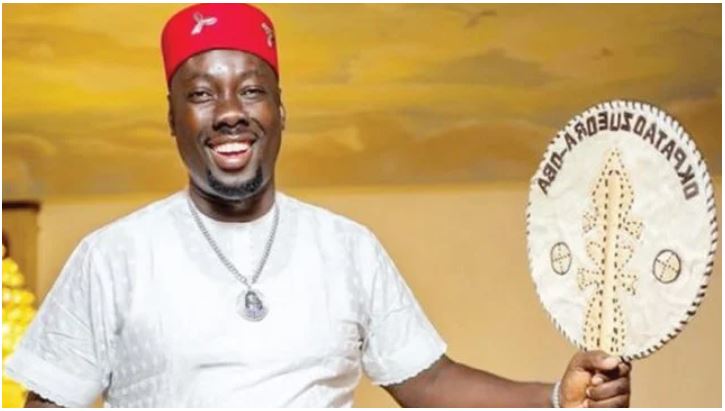 Entertainer and nightlife boss, Obi Iyiegbu aka Obi Cubana, has been trending following the show of affluence on the occasion of his late mother’s funeral and burial ceremonies.

Ahead of the burial of his mother who dies in December 2020, the 46-year-old socialite recently had her immortalised with a pendant and neckpiece worth $100,000, the Nation reports.

WuzupNigeria presents you 13 things you ought to know about the entertainer:

The popular businessman is the fourth child and last son of his parents.

He graduated from the University of Nigeria Nsukka in 1998 with a Bachelor of Arts degree in Political Science.

The industrious businessman tags the motto of his business as “The World is Yours.”

His dominance in the entertainment circle started in 2006 after he founded a Club called Ibiza Club in Abuja. The nightlife hub became a mecca of sort for fun-seekers.

Cubana was first established in Owerri, Imo State and spread across various states in the country including Lagos, Abia and Enugu over the years.

The socialite is currently working on Cubana Dubai and Cubana Real Estate.

Obi is married to Ebele Iyiegbu, aka Lush Eby, who is a lawyer by profession. They are blessed with four boys.

The businessman has been decorated with worn several awards and recognition across the country including 2018 Democracy Heroes Award, Democracy Entrepreneur of the year, Ghana-Nigeria Achievers Award, Inspiring Personality Award 2017 and several others.

The nightlife boss owns several mansions across the country with couple of exotic cars from Mercedes Benz 4matic S40, 2 Lexus LX, Bentley and others.

Related Topics:FeaturedObi Cubana
Up Next