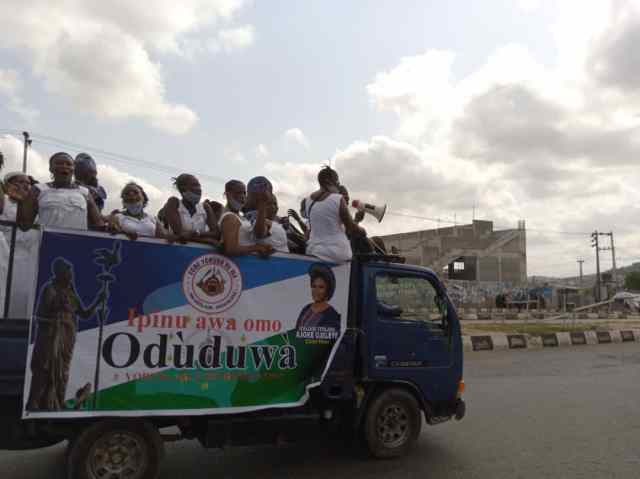 Eleven protesters, who defied the police ban on the mass rally in Abeokuta, the Ogun State capital, were on Saturday arrested while agitating for self determination of the Yoruba,

The demonstration started around 9am was disrupted by men of the Ogun State Police Command who took over the streets of Abeokuta in order to stop the rally.

According to PUNCH Newspaper, a police helicopter was sighted hovering over some areas in the state capital while policemen stormed the palace of the Alake of Egbaland where the agitators converged for the rally and arrested 11 of them.

The arrest was said to have led to a clash between the agitators and the police officers around the Eleweran area when the proponents of secession demanded release of their members.

However, WUZUPNIGERIA gathered that they were later released on the orders of the Commissioner of Police, Edward Ajogun.

The Publicity Secretary of Omo Kootu Ojire Omo Oduduwa Atata, Ibukunoluwa John, in a chat with newsmen said the rally as peaceful and violent-free.

“The rally started exactly 9am and ended 4:30 pm and ended without violence. We were not part of any violence or hijacking of police rifle,” he said. “We want to tell the public that we are not part of anything that is violent today. We had our rally. It was peaceful and nothing like violence.”

On his part, the Media and Communications Secretary of Ilana Omo Oodua, Maxwell Adeleye, said the release of the arrested agitators was as a result of the surging crowd of Yoruba men and women moving towards Eleweran Police Headquarters.

The Police Public Relations Officer in the state, DSP Abimbola Oyeyemi, accused the agitators of launching unprovoked attacks on the security operatives.

Oyeyemi said the agitators attacked the police headquarters in the state and some policemen on duty.

He confirmed that eleven of them were earlier arrested for unruly behaviour at Alake Palace and were later released on the order of the Commissioner of Police in the state.

The PPRO however lamented that despite the release of their members, they still went ahead to attack their men at More junction not far from the police headquarters.

Related Topics:FeaturedNigeriaOduduwaYoruba Nation
Up Next