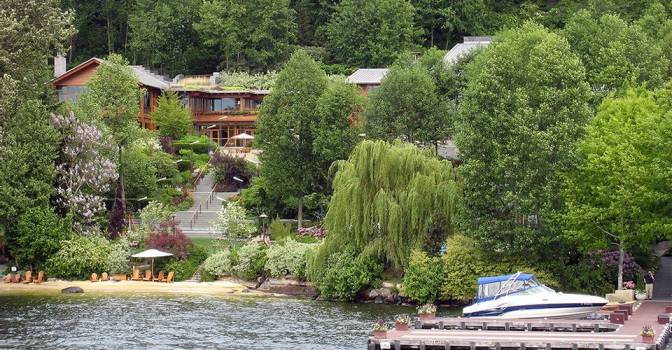 There is a saying that a home is not a home when your loved ones are gone.

Bill and Melinda Gates are two of the most influential, powerful and wealthiest persons on planet earth and the bombshell regarding their divorce has done little to affect their wealth.

From the beginning of their relationship in 1987 to the wedding ceremony held in Lanai, Hawaii in 1994 and working together as the CEO/co-founder and general manager at Microsoft, respectively, Bill and Melinda amassed a fortune for themselves.

Some of these funds have been shared helping people across the world, including Africa.

However, there is a part of their fortune that could not be shared with the entire world but their three children; Rory John Gates, Jennifer Katharine Gates, Phoebe Adele Gates, and maybe a few families, friends, and business associates.

1.
The nature-friendly 66,000-square-foot (6,100 m2) mansion incorporates technology in its design and it was named named “Xanadu 2.0” after the fictional home of Charles Foster Kane, the title character of “Citizen Kane.”

2.
The house was designed collaboratively by Bohlin Cywinski Jackson and Cutler-Anderson Architects of Bainbridge Island, Washington. The mansion is a modern design in the Pacific lodge style, with classic features such as a dome-shaped roof and oculus.

3.
Bill and Melinda’s mansion in Seattle reportedly took seven years in construction before it was completed in 1977. Designed with a collaborative effort by Bohlin Cywinski Jackson Architects and Cutler-Anderson Architects.

MORE READING!  Tanzania stops flights to and from India amid coronavirus surge

4.
Richlist reported that Bill originally purchased the land accommodating the mansion for $2 million, invested another $2 million for the supply of wood for the mansion’s many walls, ceilings, and floors and over 100 electricians wired the house’s extensive technological system, which is powered by dozens of computers and 52 miles of fibre-optic cables.

5.
The construction costs of $63.2 million seem to have been worth it, as the house has an assessed value of $147.5 million and a yearly property tax bill of more than $1 million.

6.
In the entire mansion, there are seven bedrooms, six kitchens and 24 bathrooms, 10 of which contain bathtubs, a 200-guest reception hall, with a 22-foot-video screen on one wall and a six feet-wide limestone fireplace on the adjacent wall, according to Arch2o.

7.
Richlist added that there is a full restaurant-grade kitchen that sits just off the hall to prepare food and drink during parties and the banquet hall itself is more than 2,300 square feet.

8.
The mansion has a 60-foot heated swimming pool with an underwater music system.

9.
The mansion has a private library that reportedly houses a manuscript that cost the philanthropist a whopping $30 million.
10.
Bill and his family get to exercise in a 2,500 sq. ft. gym, and afterwards, they and their guest dine at a 1,000 sq feet dining room.

SHOCKING! Bill and Melinda Gates had no prenuptial agreement (DOCUMENTS)