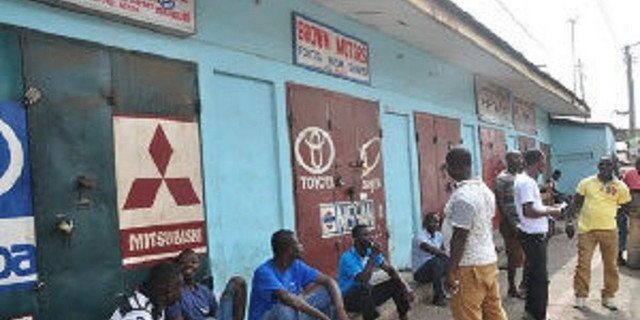 Nigerian business owners in Ghana on Monday raised the alarm that the host country has continued to breach their rights after security operatives shut 40 more shops.

This is just as the Nigerians in Diaspora Commission (NIDCOM) reassured that the ministerial committee set up to look into the crisis is working closely with the traders.

The development is coming five months after the alleged collapse of bilateral talks aimed at addressing the controversy that led to the closure of Nigerian shops between the Nigerian government and its counterpart in Ghana.

Recall that the cause of the lingering controversy was hinged on the $1 million levy imposed on Nigerian businesses and other foreign investors by Ghana Investment Promotion Centre (GIPC), before they could allowed to run their operations in the country.

The stringent condition generated a backlash in Nigeria and neighbouring African States, which regarded the action as a breach of ECOWAS’ trade protocols.

Daily Trust quoted the President of the Nigerian Traders Union in Ghana, Chukwuemeka Nnaji as saying that Ghanaian authorities has sealed 40 more shops after the bilateral talks.

Nnaji revealed that their host clamped down on the affected shops about a week to Ghana’s general elections.

“To be precise, it happened on November 30, 2020; one week to Ghanaian election. I returned from Nigeria then. As I arrived in Ghana, they came and locked up my shop, and 40 other shops.

“Those shops were different from what I reported months ago to the ministerial committee in Nigeria. Till date, all the shops are locked up.

“The update now is that Nigerians’ shops are still closed and the authorities are warming up to close more,” he said.

A worried Nnaji wondered why the lingering crisis between the traders and the former Gold Coast after his delegation was reassured at a meeting with Nigeria’s ministerial committee.

“If the only option Nigeria has is to evacuate us from Ghana, I think it’s well and good because we must leave Ghana for a reason and that reason is that Ghanaians don’t want us to trade in their country.  We have not committed any sin. We have registered our businesses and we are paying taxes.

MORE READING!  Dare Adeboye: God is protecting them from evil to come - Ezekwesili

“Ghana is not like Nigeria; here, we pay taxes in millions of naira equivalent. Last year, they gave me an 11,000 Ghana cedis estimate, almost a million naira. A working permit is $500 while a resident permit is $400.

“Ghana’s law does not stop foreigners from trading. There is nowhere the law says that, but they just formed it (a new rule) and are using it to colour us blue. And, I’m surprised that the government of Nana Akufo-Addo is supporting such things,” he bemoaned.

His view was corroborated by Secretary General of the Nigeria Union of Traders Association in Ghana (NUTAG), Comrade Evaristus Chukwuduruo Nwankwo.

Nwankwo alleged that the local traders are unrelenting in their agenda of chasing Nigerian traders away from Ghana, especially where they seem to have any little competition.

“As we speak, the over 250 shops locked on December 2, 2019, July 2020 and December 2020 have not been opened. In fact, some landlords who are working with GUTA have forcefully taken some shops back even when rents have not expired,” he said.

MORE READING!  Protest over my disappearance saved me - Mbaka

He described the living conditions of his members since 2019 as miserable.

“A lot of people have turned to beggars. We have lost a few of them who could not afford to manage their underlying sicknesses like diabetes.

“The Charge de Affair at the High Commission of Nigeria in Accra, Madam Esther Arewa, sent her widow’s mite in cash and kind to us and we are grateful to her. It was her personal donation and not from the government of Nigeria I must emphasise.”

Meanwhile the spokesman for the Nigerians in Diaspora Commission (NIDCOM), Abdulrahman Balogun, has reassured that the ministerial committee set up is working closely with the traders.

Balogun disclosed that after the traders met the ministerial committee last December, the federal government promised to facilitate the return of those willing to come back to Nigeria.

“It’s about four months now, but the traders are yet to take the offer,” he said.

Related Topics:five months after bilateral talks
Up Next